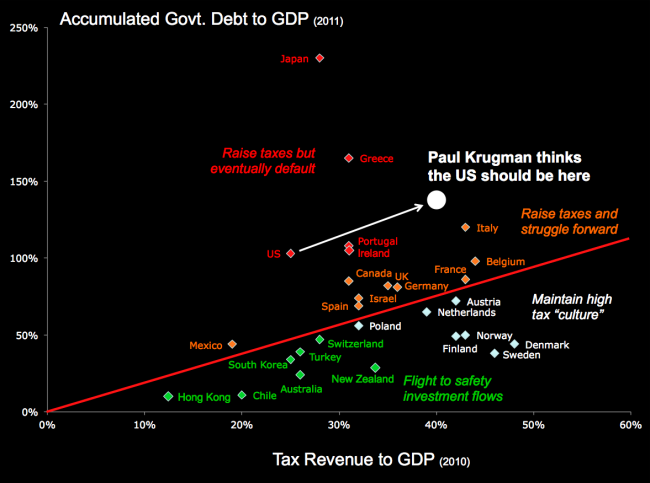 Now a couple of days after my taxation video, Paul Krugman comes out saying: “The US can have a 40% share of taxes of GDP without terrible disincentive effects”. I think Paul Krugman is out of step with what most Americans think a “fair” level of taxation is. But at least we see now what he thinks is needed to pay off the huge increases in Government debt Krugman himself has been advocating. When will this man shut up – or at least move to Europe so he’s among like-minded, Communist friends. Let’s face it – academics hate successful people, people who make money. At school they were top of the heap, but in real life no one looks up to them. They are over-taken by entrepreneurs and self-starters – people who weren’t very good at school and realised they had to get off their butts to make money and succeed.

Meanwhile the academics loll around, publishing papers, having intellectual feuds with their academic rivals and shooting for that ultimate prize – tenure. The pot of gold at the end of the rainbow, where they don’t have to compete any more, just sit back on their old published papers and add their name to the ground-breaking research done by their younger, brighter and more capable students.

Those last 2 paragraphs got me the largest number of “unsubscribes” in Emini-Watch’s history. Plus a fair amount of hate email. Serves me right I suppose. As with any occupation there are good people and there are bad people – and I painted with a pretty broad brush.

Get lazy, get fat and live off the labours of others – reminds me of another group of blood suckers, politicians.

And Mr. Krugman, instead of just saying “I think the US blah, blah, blah” – DO THE RESEARCH. Prove your point. Do the analysis. Like Ken Rogoff and Carmen Reinhart, academics we can look up to. For the record, the disincentives start with any taxation number above zero. Just ask the entrepreneurs leaving California for Washington, State not D.C.

Check out the video on Yahoo Finance around the 4:30 mark.

Taxation, in the US and Europe, is becoming the next hot topic – and look out, the rhetoric and “academic support” for higher taxes is mounting.