Gold and Silver made huge down moves this last month. Why should you care?

After all, you’re an Emini day trader. Well hopefully this video sheds some light on the gold and silver markets and why I watch them.

“When gold is a free market, not under a gold standard, it rises with inflation and falls during deflation … We are simply in a period of economic collapse and that is when gold shines as insurance.” Martin Armstrong, Armstrong Economics

The Gold, Silver and Platinum markets are collectively known as the Precious Metals (or PM) market. Historically, the precious metals were important as currencies but today their jewellery and industrial uses are more significant.

Gold still holds a psychologically very important position as a “store of wealth”, particularly during times of high inflation.

Gold, Silver and Platinum prices are closely correlated and these markets move very tightly together. However, from time-to-time one of the markets will get out of kilter with the others – for example, Platinum had a huge rally in 2008 and Silver fell behind Gold in 2010. But, eventually long term relationships restore themselves and the markets move back in sync.

Gold rises when there is political unrest & uncertainty One of the biggest myths believed by the general public is that Gold is a safe haven during financial panics. A quick look at a 35-year chart of Gold versus the S&P500 index shows this to be false.

However, the price of Gold does rise during periods of intense political uncertainty (and war). During these periods the stock market can still be rising too (a little war is bullish). But if the stock market then corrects, Gold will weaken too. The down trend can be attributed to the long term “taming” of inflation and, by implication, the stabilising of the value of the US Dollar. Between 1990 and 2000 the US economy was on fire – growth was being driven by the Tech boom and money was flooding into the US to chase high economic growth returns. All of this had a negative impact on the price of Gold.

The up trend in Gold started after the “Tech Wreck”, when the US Fed stepped in and lowered interest rates to zero and held them there for a prolonged period of time. In addition, the US Government started deficit spending and financing a series of wars. This caused a huge growth in the money supply and resulting devaluation of the US Dollar.

The price of Gold rose continuously from 2001 until 2011. The peak may have been marked (temporarily) by the battle in Congress to raise the US Government debt ceiling – a sign that the US Government knows it cannot continue to deficit spend indefinitely.

Since 2011, the US Government has continued to deficit spend. This has been enabled by the Fed buying the majority of all new Government Bonds issuance – a process innocuously called Quantitative Easing or QE. This has increased the money supply in the US, which ordinarily would have led to an increase in the price of Gold. However, Central Banks around the world have been much more aggressive than the Fed in their own QE and increasing the size of their balance sheets. As a result the US Dollar has risen in value and the price of Gold has fallen. Watch the latest video: Central Banks, QE and Gold

Follow Gold to judge the strength of the US Dollar 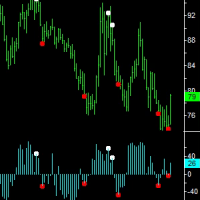 Gold is inversely correlated to the US Dollar. That makes sense, since Gold is priced in US Dollars and is a store of wealth – if the US Dollar depreciates in value then Gold will rise.

You need to keep your trading capital in the strongest currency possible. What’s the point in making Emini points every day, if your profits are being eroded by a depreciating currency?

So here’s what I do. Once or twice a year I move my base trading capital into the strongest major currency I can find.

During mid-2011 I saw the Dollar Index bottoming, so I moved my trading capital out of the Australian Dollar and into the US Dollar. I was too early and missed a nice little rally in the Australian Dollar, but at least I’m well positioned if the stock market weakness continues.

I use the “Better” indicators (plus Commitment of Traders analysis) on Gold, Silver, Euro, Aussie, Pound and Dollar Index to get an overall picture of the strength of the US Dollar. Then if I see the US Dollar weakening I pick the strongest currency.

My name is Barry Taylor. I’m just a regular guy who makes a living day trading Emini futures full-time. This website shows what works for me and is a record of how my trading methodology is evolving … more »

Join 11,047 traders who follow Emini-Watch. Input your email address below to get Emini trading and market updates: