Recessions are tough. Depressions are worse – much worse. But there are some good things that come out of them. Marx (and Engels) coined the term “Creative Destruction” – that they viewed as an integral part of Capitalism. Existing systems and wealth needs to be destroyed, by periodic economic crises or war, in order to clear the ground for the creation of new systems and new wealth.

Leaving aside that we need to destroy and re-build our political, business and media systems. During depressions we get much better art, writing, food, relationships and music. It is no coincidence that U2 sprung out of massive hardship and upheaval in Ireland: ethnic and political conflict, terrorism and bombings, economic stagnation and unemployment. But out of that came:

And with economic hardship now being experienced once again in Ireland, that creativity is coming back. Questioning and criticizing the status quo. Now before your ask – yes, these 2 guys wear plastic bags on their heads. Some people see their “act” as comedy – but don’t be fooled. These guys are very articulate, politically aware and see right through what is going on around them.

Remember the medieval Court Jester didn’t just provide entertainment in a funny looking outfit – he could deliver bad news to the King that no-one else would dare deliver. Hiding your face behind a plastic bag allows you say what you like and forces the listener to focus on your message and not who you are.

If Ireland is going to change it’s political direction over the next 6 months – rescind the bank bailout, default on their bonds, exit the Euro, exit the European Union – it will need symbols and spokespeople to coalesce around. I wonder if the Rubberbandits are, or might become, the voice of modern Irish youth protest.

And another (almost) skyscraper marked the Irish peak

Skyscrapers and construction of the world’s tallest building almost always signal market peaks and the beginning of recessions or depressions. For example:

The peak of the Irish “Celtic Tiger” economy was also marked by a skyscraper, or the announcement of a soon to be built skyscraper – the U2 Tower. 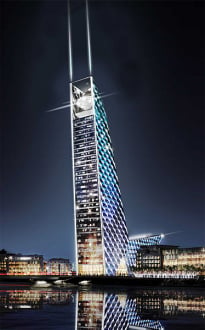 It was to be built in Dublin and be the tallest building in Ireland at 130 metres high. There were going to be luxury 2-bedroom apartments selling for 1 – 1.5 million Euros. And a recording studio owned by the rock group U2 in an egg-shaped “pod” at the top of the building!

The design was announced in October 2007 but by October 2008 the project had been “suspended indefinitely” because of the collapse of the Irish economy. It’s fitting that the project marking the peak of the Irish economy involved U2 – the rock group who, more than anything else in the past 30 years, has put Ireland on the world map. And whose creative energy had been forged in Ireland’s previous slump.